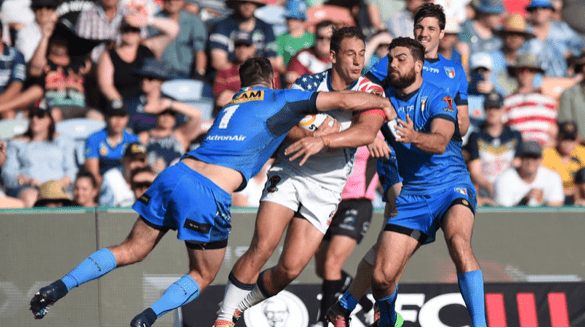 No helmets, no pads, no blockers, no first downs, no kneels and no time outs. Two teams of agile, fast and powerful football players have to be able to play every position on the field, be it offensive, defensive and special teams and regularly change from one position to the other during the full speed run of play in the time it takes for an NFL quarterback’s heart to skip a beat. This is the world of Rugby League Football.

2017 marks the 15th iteration of the World Cup of Rugby League, a game that started in the North of England in 1895. It differs from its sister sport Rugby Union which it is often mistaken for, in that the more modern and more free flowing game of Rugby League has smaller (Rugby has 15 players on the field while Rugby League has 13) and more versatile teams competing with ‘plays of the ball’ as opposed to constant scrimmaging in order to speed the game up and provide enthralled audiences with constant visibility of the football which often gets lost under the rucks and mauls (Rugby Scrimmages) of its predecessor, Rugby.

First held in 1954, the 2017 Rugby League World Cup will showcase 14 men’s and 6 women’s teams from around the globe in Pacific Island host nations Australia, New Zealand and Papua New Guinea where the game has flourished. In Australia, Rugby League is the local form of Football. It is known as a working man’s sport and is often referred to as ‘the greatest game of all’ on the East coast of Australia where it has been a very popular and highly professional sport for over a century. In the US, the word ‘Football’ conjures up the very different images of Steely McBeam, Ben Roethlisberger in a shiny logo’d helmet behind a highly posed offensive line on perfectly manicured astro turf (Rugby League is played exclusively outdoors on grass). The two games have evolved from Ruby but taken very different paths. The games communities are even more diverse. The NFL generated more than $13 Billion in the 2016 season while in the USA has been floundering to try to get off the ground since before World War II.

After several heartened attempts in the 1970’s and 1990s to create a salient Rugby League competition in the US, the more successful attempts came from the AMNRL which started in the late 90’s and the USARL (United States of America Rugby League) competition in 2011. These competitions consisted of a number of teams including the Bucks County Sharks who play at Falls Township Community Park and highly successful Philadelphia Fight. The domestic competitions are still evolving however it is the national team that is now on the world stage.

The USA has grown in strength despite the domestic turmoil to qualify for two world cups including the current 2017 world cups with their new nickname the USA Hawks.

Meanwhile on the other side of the Atlantic Rugby League started being played in Italy in the 1950s and much like other countries, Rugby League became the game of Rugby Union dissidents. Italy continued to grow its Rugby League profile through various matches against European opposition and the code evaporated until it was revived in the 1990’s. Mick Pezzano and John Benigni’s passion for the team led to Italy playing its first Rugby League World Cup in 2013 and qualified again for this world cup in 2017.

The 2017 World Cup of Rugby League was always going to be a challenge for the non pacific nations despite the sport being invented in England. The USA opened their world cup campaign with a 12 points to 58 loss against a heavily favoured Fijian team. World’s collided as Italy would play the US in a historical finals match. Despite some gallant efforts and some great play by the USA the slick Italian team which do field some top fledge professionals, scored a convincing 46-0 victory in what was a truly entertaining game.

Meanwhile Italy opened the tournament against a hard charging Irish team that would generate the first upset of the tournament, downing the Azzurri 36 points to 12. After defeating the USA Hawks, the Italians fell to Fiji 38-10 effectively ending their 2017 campaign. Italy won in their first ever comeback year in international competition and had a big win in this tournament and scoring the ‘best try of the tournament’ for many, in the last game.

The USA’s last throw of the football for this world cup will be against Papua New Guinea in Port Moresby on November 12. The USA are at $81 to win while PNG open at $1. The odds are stacked heavily against the USA Rugby League squad but isn’t that just an invitation to live the American Dream?