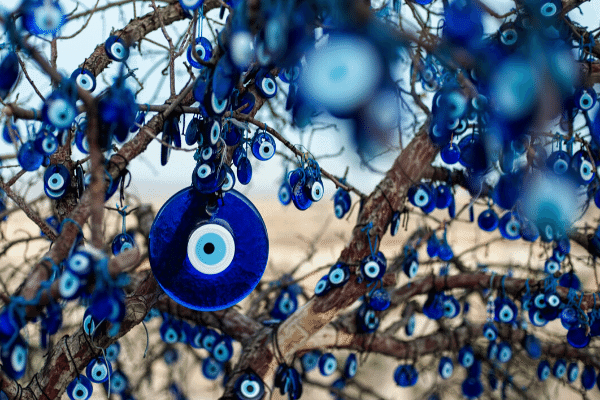 Many of our Italian relatives believe in superstitions. One of the more popular superstitions is the Malocchio (mal=bad occhio=eye) or the evil eye.

It’s the look that one person gives to another if they are jealous or envious. An evil eye is not necessarily malicious; it is simply a look that brings misfortune.

However, some believe that it can bring bad luck to another person. Some believe that the evil eye comes from the devil. According to Italian folklore, those giving the malocchio can cause harm to someone else. Legend says it’s just another way of putting a curse on others that can cause physical pain such as head or stomach aches or even cause misfortune.

It’s believed that this could be done by looking into your eyes, but also through gestures like making a “V” sign with your index finger and thumb.

The evil eye is not just for Italians though! Many other cultures believe in the power of the evil eye as well. For example, in Latin America, it’s known as el Ojo Maledicto (the cursed eye), while in China it’s called the jinxed eye.

Protecting Yourself from the Italian Malocchio Evil Eye Curse

What can you do to prevent the malocchio (often pronounced “maloik”)?

In order to protect yourself from the evil eye, Italians wear special rings called bracciali di protezione (protection bracelets). These are often made out of silver and have a protective charm on them. They can be worn all day long and are considered very lucky charms.

Other Italians wear a Malocchio charm or horn (cornetto, corno, or cornicello) which resembles a chili pepper. The horns are usually made of coral, gold, or silver and are either worn as a necklace or hung in one’s home to ward off evil spirits.  This horn tradition evolved in Old Europe when the horned animal (the moon goddess) was considered sacred. Horns were used to ward off evil spirits and protect against witchcraft.

They are a culturally popular amulet and are primarily found in Italy and in North America among descendants of Italian immigrants. In some instances, the corno has become a symbol of Italian pride.

Besides wearing the corno, an old wive’s tale says that to diagnose someone with the evil eye, have them drop three drops of olive oil in a bowl filled with water.  If the oil forms the shape of an eye, the victim has indeed received the malocchio.  As the oil separates from the water, make the sign of the cross and say, “In the Name of the Father, the Son and the Holy Spirit.”

Then make the sign of the cross on both of your hands.  As you do this, place your hands on the other person and say: “Father this prayer is being said for (insert name of victim) and I pray it works in the name of the Father, the Son and the Holy Spirit.”

The old wive’s tale then states that you must repeat this prayer three times.  After that is done, both people must say one Our Father, one Hail Mary and one “Glory Be To the Father, Son and Holy Spirit as it was in the beginning is now and forever shall be.”

Sometimes this part is done by holding hands.

It is known that this prayer is the most effective on Christmas Eve, but, of course, it will still work during any time of the year! What are some other well-known Italian superstitions? Share with us your tales!