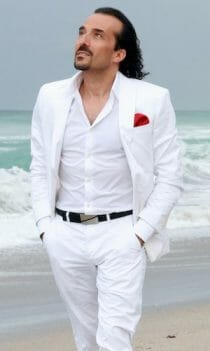 The Voice of Romance Brings Pop-Opera to America

In this week’s installment of Ciao Pittsburgh’s Italian-American Profiles of Success, we reached all the way down south to Palm Beach, Florida to chat with Franco Corso, a pop-opera international recording artist originally from San Remo, Italy. His voice offers a blend of pop Italian and American operatic style. Known in the music circles as ‘The Voice of Romance’, his voice runs the range of baritone to tenor with a magical quality that seems to hypnotize and mesmerize.

His hometown, San Remo, is along the shores of the sun-kissed Italian Riviera, Ventimiglia, bordering the south of France and Monte-Carlo. His career began as a member of the local church choir at the age of 6. This inauspicious start would set the tone for the path his career would take.

He is in constant demand throughout the U.S to share his passion on large stages with symphony orchestras, festivals and corporate events. One of his many career highlights was his sold-out concert at the Berklee Performance Center in Boston, prior to a successful TV campaign aired on NBC and CBS, where Franco was accompanied by multi Emmy award music composer and director Mike Renzi.

His passion originates from the unique struggles he has overcome, but his musical inspirations are drawn from classic luminaries such as Caruso, Andrea Bocelli, Josh Groban. These influences were blended together as he took audiences on a Musical Journey Through Italy, in his acclaimed Show: “A Tribute to Andrea Bocelli and Friends.”

Last June, Franco debuted his first CD of five original songs. Appropriately titled ‘Angel,’ he calls it his love letter to all those he has met in his life who have guided his path.

Franco was gracious enough to answer a few of our questions last week.

CP: What do you find to be the most rewarding aspect of your career?
Franco: Bringing the Italian music into people’s hearts and sharing with them the passion of music.

CP: Can you tell us about your Italian heritage?
Franco: I was born in Italy and moved to the USA 14 years ago prior to a degree in the hospitality industry.

CP: What are some of your favorite Italian traditions and why?
Franco: The Italian lifestyle is based on family traditions and values. Italy has built on years of history. and when talking about history, you are talking about memories. Italians are attached to their roots and this is why no matter where we live, we will bring those values with us and share with the world.

CP: What does being Italian mean to you?
Franco: Italy is a little larger than the entire state of Florida but the amount of talent in my country’s fashion, food, music, automobile industries, is such an incredible asset. So it makes me sad when I read the news about the unemployment rate and that the economy is at an all time low. Italy is unfortunately losing some of its best talent because they are moving to other countries like America where freedom in business can lead to self realization of your dreams.

CP: What accomplishments in life are you most proud of?
Franco: Bringing Italian music to the U.S. has been very rewarding, especially in such important venues at Donald Trump’s exclusive Mar-a-Lago club, to sold out performance centers such as the Lyric, Eissey and Maltz Theaters.

CP: What are some of your favorite hobbies?
Franco: Exercise! Being a pop opera  singer, I need to exercise constantly to keep in shape. I go to the gym every day and do some breathing exercises to keep my vocal chords trained.

CP: What advice would you like to share with other entrepreneurs and small business owners?
Franco: Follow your passion and be determined to focus all your energy in what you believe and you will reach success.

For more information on Franco, please visit his website at www.FrancoCorso.com.