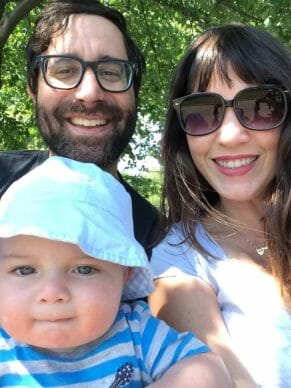 In this month’s Personality Profile, Ciao Pittsburgh chatted with former Pittsburgh and current Brooklyn, NY resident, Dom Cosentino. A former writer for Deadspin.com, Dom is now a beat writer covering the New York Jets for NJ.com and The Star-Ledger. Dom was kind enough to respond to some of our questions about his Pittsburgh roots, sports journalism career as well as his Italian heritage.

CP: First, tell us a little bit about yourself and your family.

Dom: I grew up in Pittsburgh, and even though I haven’t lived in the area for many years, I’ll always be proud to say I grew up in Pittsburgh, and to remind people I grew up in Pittsburgh. My paternal grandparents emigrated from Calabria in the 1920s. They came separately—my grandfather, Domenick, who I’m named for, came first. My grandmother, Caterina, arrived three years later. My father’s name was Richard, and Doreen is my Irish/German mother. I have three siblings: Cathy, Richard, and Michael. They all still live in the Pittsburgh area. I get back to Pittsburgh several times a year for visits. I’ve been gone a long time, but I miss it. I’ve been married a year and a half to a wonderful woman named Megan, and we have a fantastic son named Cameron, who’s about eight months old.

CP: What’s it like being a beat writer for the New York Jets?

Dom: Pretty intense. The Jets are never dull. There always seems to be something going on with someone or something in that organization. And they’ve had an incredibly busy offseason that began with the firing of head coach Rex Ryan—the guy’s a reporter’s dream—and the general manager, and continued with a bunch of free-agent signings, plus a contract dispute. I compete with reporters from all of the New York City papers, including the tabloids, so I work a lot. But I love it. It’s the sort of work I always wanted to do after spending years covering high school sports in Pennsylvania. My only qualm is that it’s a much easier job for someone who’s single and childless, since it can be quite a grind at times. But all in all, I really can’t complain.

CP: How did you get into sports journalism? What do you find to be the most rewarding aspect of your career?

Dom: I got into it by studying communication at La Salle University in Philadelphia, a Christian Brothers school like Central Catholic back in Pittsburgh. As much as I love Pittsburgh, I was eager to get out of town when I finished high school. Just needed to expand my horizons a bit. I fell in love with Philly—it really is a great city—and lived there for 18 years, mostly working at a small suburban newspaper until I met Megan and got a job at Deadspin, a sports blog based out of New York City. The Deadspin experience was crucial for me; the site has an extraordinary array of talent, from which I learned a ton. I worked there a little more than two years before landing the gig covering the Jets.

The thing I like most about the job is breaking a story. Just getting something one of the New York papers (the tabloids especially) or the national big shots like Adam Schefter haven’t gotten first. It’s a pretty big thrill when it happens. The other thing I like is just telling people something they don’t know. There can always be a detail or a situation to explain, and fans of any sports franchise (whether it’s the Steelers or the Jets or whoever) always like to learn more about their team. It feels good to be the one keeping them in the know.

CP: What part of Pittsburgh are you originally from and where do you currently live?

Dom: I grew up in the city, in Squirrel Hill. That’s pretty much where my paternal grandparents settled once they both got to the U.S. My dad, who died last year at the young age of 85, had lived in Squirrel Hill his whole life. My grandfather, like a lot of Italians who had settled in Squirrel Hill, had been a gardener. My dad did it, too, for a while, but like plenty of immigrant children his age, my old man was eager to get an education, which he did. He earned an engineering degree and worked for the city for many years.

I now live in Brooklyn, N.Y., specifically in the neighborhood of Williamsburg. It’s a rapidly changing area, but the neighborhood’s roots are very much Italian, which is a coincidence and not something I was looking for when I moved here. Most of the old businesses that were Italian-owned are long gone, but there are a few here and there, and it’s fascinating to see how they’ve preserved their identity and even their way of life in the face of all the surrounding changes. We’ve still got a butcher, a fish market, a deli, a bakery, and two outstanding restaurants that have deep Italian roots in the community. It’s comforting, in a way.

Dom: I mentioned my grandparents, and my father. My father was very proud to be Italian. My Italian grandparents died before I was born, but my dad was fond of telling stories about them, about things they did to adapt to living in the U.S. My dad grew up on a tiny street in Squirrel Hill called Imperial Street. Squirrel Hill, as everyone knows, is mostly a Jewish part of the city. But Imperial Street and the area around it had earned the moniker “Spaghetti Street” because Italians like my father and his cousins and their friends all grew up there. In another lifetime, I would have written a book about “Spaghetti Street,” because, sadly, a lot of those old timers have died off. But I heard a lot about my dad, his sisters, his cousins, the aunts and uncles, and some of the more distant relatives who still live in Italy. The stories were always told with such pride, affection, and warmth.

Dom: The biggest, without a doubt, is continuing with the seven fishes on Christmas Eve. This was something one of my father’s sisters, who’s also gone now, had always done when I was growing up. We’d all pile into the car and head out to Monroeville to Aunt Bebe’s house to eat fried smelts, baccala, linguine with clam sauce, crab soup, capellini with anchovy paste—oh, man, I’m getting hungry just thinking about it. Thankfully, one of my Aunt Bebe’s sons and his wife have continued the tradition. It’s the best meal of the year. The last couple of years, my work covering the Jets has kept me from getting back to Pittsburgh for Christmas. But my wife and I have kept up with what we could by making fried smelts and linguine with clam sauce and video chatting with everyone back in Pittsburgh. It keeps us connected to who we are, and to my father’s and my aunt’s memory.

Dom: It mostly means a connection to my father, whom I miss dearly every day. As I mentioned, he loved being Italian, and he loved savoring so much that is beautiful in life—family, food, laughter. Even though I never knew my grandparents and never got to know most of my Italian relatives in Italy, I feel tethered to them in some way because I was lucky to have my dad around as a friend (and as an occasional drinking buddy, when either of us would visit the other) for as long as I did.

Dom: First and foremost is having a wonderful wife like Megan and a little meatball son like Cameron. I married late, so I lived a pretty full life before that, but I love coming home every night to those two. I’m not sure how much of an accomplishment that is except to say I’ve won some sort of life lottery, but I can’t imagine life without either one of them now. Beyond that, I’m most proud of having made it as a sportswriter in New York City, where it’s so competitive. I’ve held my own and won some battles in the country’s most intense media marketplace. That ain’t half bad.

Dom: I like to read, mostly current events and non-fiction and sportswriting—good sportswriting. I used to read more books and go to the movies more often, but I don’t have as much time as I used to. I catch the Pittsburgh Pirates on the internet when I can—my dad was a big baseball fan, and seeing them finally playing well after all these years is a fun diversion. Beyond that, I spend my time with Megan and Cameron, whether it’s going to the park or walking around Brooklyn or Manhattan or checking out an art gallery or museum or just sitting and having a cocktail at home. Megan and I are big on having a nice drink at home after work as we unwind and talk about our day.

CP: Who in your life has inspired you the most?

Dom: I’d have to say both of my parents. My dad, above all else, was honest, and he dealt straight with people—no phoniness, no B.S. And my mother always encouraged all of us to be ourselves, and to think for ourselves. That’s how she’s lived her life. Before she was married she worked as a registered nurse. But she gave that up to raise four kids. I’d be curious to see how she’d fare today, when she would have maybe had the opportunity to pursue many of her independent ambitions. She’s tough. She doesn’t take crap from people. She could run for president.