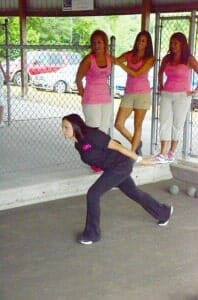 The mayor was dressed for the occasion, wearing his “Veni, Vidi, Bocce” polo shirt meaning “we came, we saw, we bocce.”

According to the World Series of Bocce Facebook page, these were the final results:

Wickliffe I-A actually had to battle back from the losers bracket to beat a very formidable Vandra Brothers team. Liquor Express continues to set the standard for professional, competitive bocce play.

A more comprehensive list of results will be posted soon.