What is a ‘Cuzzupe’ and Other Easter Treats? 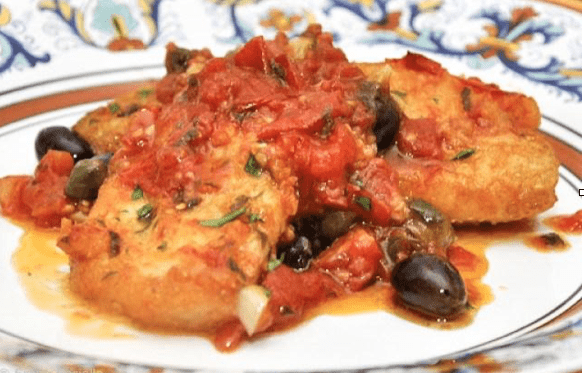 Christmas and thanksgiving are known for their big family feasts with both Christian and non religious families gathering together to dine with turkeys, potatoes and salads, but these gatherings pale in comparison to an Italian Easter.

While Anglo-Saxon parents carefully place small, store bought easter eggs around the backyard and exchange a branded grocery store egg with each member of the family, Italian families have had their heads buried in ovens for days on end producing a very purposeful and regimented period of family famine followed by indulgent, all consuming all encompassing feasting. Chocolate is on the margins where whole foods, natural ingredients and recipes lasting generations sometimes to the Romans are shared and enjoyed by families connected by blood but fused by food.

The patterns are similar, there is fasting, usually for the forty days of lent, certain foods and certain treats are consumed on certain days of the Holy weeks. Baccala, an air dried fish, usually cod, in Napoli is a salt cured fish in Calabria. It has a shelf life of several years and is consumed on ‘Venerdi Sante’ or ‘Holy Friday’ or ‘Good Friday’ as an act of sacrifice for crucified God.

All throughout Italy there are countless rituals, processions, traditions, people marching with torches and bare-feet along kilometres of stone streets. In my home village, dozens of people line the streets and play a parochial wooden percussion instrument in a thunderous demonstration support for the passing parade. The instruments, like the parade only arise once a year. 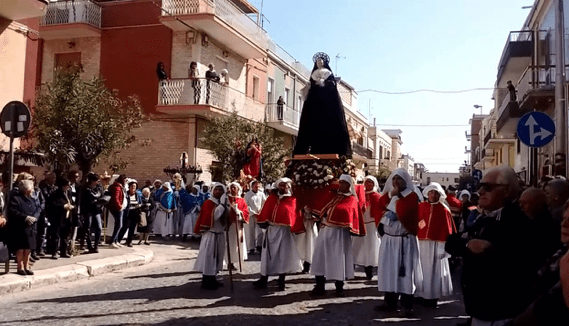 All the build up leads to a massive valve release on Sunday where an abundance of food and treats of every imagination are realised and put on the dinner table. Here is an Easter Sunday in Calabria.

Pignolata is a dish comprising of small sticky honey coated flower balls with coloured sprinkles. It cannot be Easter without eating your bodyweight in these moreish treats that would fill several serving bowls and sit around the kitchen and dinner table for people to peck at. Similarly are the ‘Turdilli’ which are also honey and flower balls this time with cinnamon and wine. 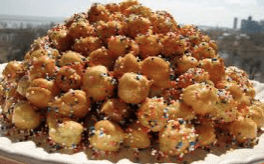 Sussemele or Nzulle as they are sometimes known are often made in various festive occasions. This dark chocolate, orange peel, dried fruit and cinnamon cakey biscuits are often saved for Christmas but do find there way to Easter banquets as well. 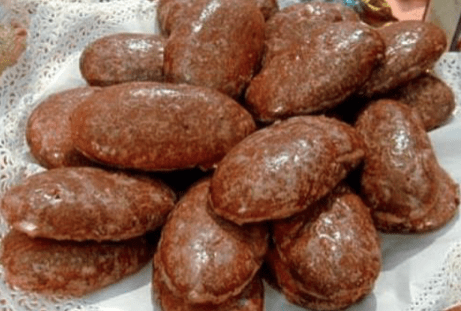 ‘Petrali’ are stuffed half moon pastries often covered in coloured sprinkles and icing. 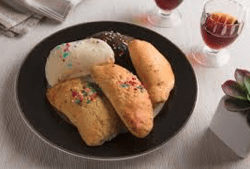 ‘Cuzzupe’ are a headline act. Milk, flour, eggs, oil, yeast and sugar are created to prepare a dough that can be shaped into anything that the home cook can imagine. The dough has coloured hard boiled egg in the centre while the surrounding dough is shaped into Easter Bunnies, Easter Baskets and all manner of shapes. Most often you will see Easter bunny’s and little people all with meticulous detail. The left-over coloured hard boiled eggs are usually put in a basket and consumed on their own, often offsetting the subtle sweet and cakey goodness of the many available treats.

Ciacchchierre are sugar coated dough strips that are fried and then baked in winding ribbons of deep fried goodness then covered in icing sugar. Messy but moreish it is not an Italian easter without picking at these with gay abandon.

Perhaps the most popular dessert is often the Mastazzola, Mustazzoli, Mastazzuolu, Nzuddha, Mustazzuali or Mustazzolus as it is known is an Italian honey bread which marry’s to a partuclar or to every occasion, depending on the region, but holds a special place at Easter. These sweet breads can be soft or have you finding your teeth. They are often designed as pillows or dressed in intricate patterns such as horses, religious figures, crosses or anything your imagination can allow with only spots of coloured foil added to colour. 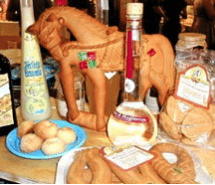 Of course in addition to this, Italians eat an absolute banquet of foods as dozens of family recipes hit the table and surrounding areas (there is never enough table to accommodate an Italian feast) for everybody to enjoy and rejoice, getting together and celebrating new life, clinking glasses and wishing each other a “Bouna Pasqua”!