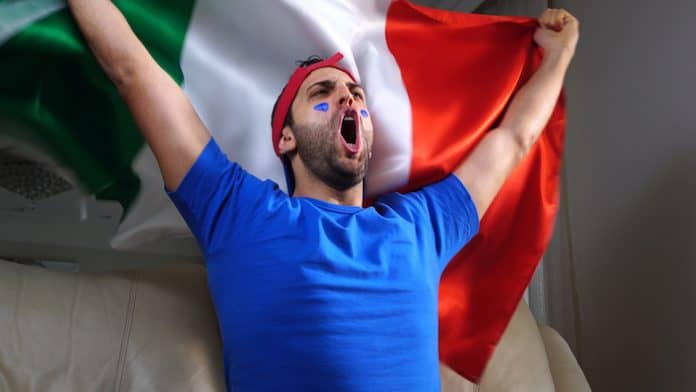 Team USA has won the 2020 (sic) Tokyo Olympics. Our heritage team, Italy has fielded a smaller team of 372 athletes which competed in 28 sports including events as diverse as skateboarding and Softball. It was with great pride that we watched an Italian America, Lamont Marcell Jacobs become the world’s fastest man by winning the 100 metre sprint and then participate in the 4 x 100m gold medal victory for Team Italia also.

The Italian Olympic Committee provided encouragement to its athletes in the form of a $212,000 cash payment for gold, $106,000 for silver and $71,000 for every bronze medal awarded. The Italian team marched in the opening ceremony wearing recycled PPE by Armani no less and had elected as their flag bearers, Women’s Trap Shooter Jessica Rossi and cyclist Elia Viviana.

Having begun in Olympia in Ancient Greece in 776 BC, it can be said that Italy, under the guise of ancient Rome became the first ‘foreign’ country to be involved in the Olympic Games when Greece fell under Roman rule in 146 BC. The Romans, particularly under Emperor Augustus and those who would come to power after him,  oversaw what was to be the most successful reigns of the ancient olympiad both culturally and financially. The Romans were, themselves, allowed to compete as the Romans were thought to be Greek descendants and combatants as famous as Emperor Nero himself would compete and naturally win in every discipline. During this period we saw the rise of professional athletes, where evidence suggests that the competitors began to organise in a manner not unlike a trade union. The athletes gained political power through their success and notoriety and could negotiate significant fees based on their victories and ability to trade on their services.

After several centuries of Roman rule, the proverbial Olympic flame would die out indefinitely when the Olympics were dismantled in 394 AD by Roman Emperor Theodosius 1 who sought to promote Christianity as the official religion of the Roman Empire.

The Olympics were revived in 1896 for the first time since Emperor Theodosius’ ban.. The Italian National Olympic Committee would be formed in 1908 when the Olympic games started becoming a major event again.

Italy would host the Summer games themselves in gladiatorial Rome tying the ancient contest to the modern reimagining and would take place almost exclusively in the host city utilizing the ancient sites as venues or backdrops to events where possible. The Rome Olympics were most notable for the Olympic debut of a light heavyweight boxer named Cassius Clay. The young 18-year-old American fighter would win all four of his fights with relative ease and defeat a three-time European Champion to win a Gold Medal. Cassius Clay would later change his name to Mohammad Ali and become one of the most significant figures in sporting history.

206 nations would compete in the 2020 Tokyo Olympics and Italy would enter the Olympic village as the 6th Most successful team in Olympic History with 246 Gold Medals, 215 Silver Medals and 241 Bronze medals, following the USA, Soviet Union, Germany, Great Britain and France. ‘Il Stivale’ is also ranked ahead of 200 other competing nations as the 6th highest ranking nation in total medals won having collected 703 medals of all colours in the 124 History of the modern competition. Notably, Italy would go on to be the most successful fencing nation in (Modern) Olympic history, winning more medals in the discipline than all other disciplines combined. At the Tokyo Games however, no such medal was won. Italy did, however, win a record amount of medals finishing 10th with 10 Gold Medals and 40 medals in total, to the USA’s First place consisting of 39 Gold Medals and 113 total medals in the final tally.

We as Italians have thousands of years of history tied to the Olympiad and will remember them as a part of our heritage. The Olympic Games are an arena that we triumph in, both as proud Americans who dominate the games now and as Italians who will always be a part of the propagation and history of the event. One prediction is certain. Our national teams will continue to triumph as we always have. Vene Vidi Vici (we came, we saw. We conquered).