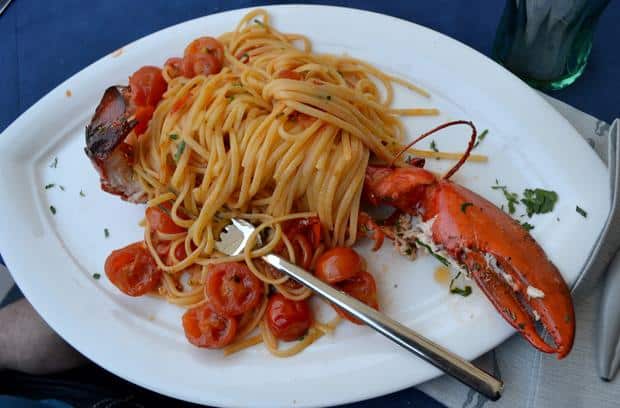 No matter where you go around the world, there are foods that are pretty much omnipresent: hamburgers, Chinese buffets, and restaurants with an Italian-style cuisine. Unfortunately, though, this usually means that they have a few pasta dishes – spaghetti, penne, perhaps tagliatelle – with a few Italian-style sauces on their menu (this usually means tomatoes and cheese, sometimes with a bit of basil and garlic), perhaps also pizza, and that’s about it.

This is a shame, considering how varied and colorful Italian cooking can be. Sometimes, even the world’s most alluring restaurants (Mediterranean in their name) will only have a very limited variety of pasta to offer. But pasta is more than just spaghetti, penne, tagliatelle, perhaps farfalle. There are probably many varieties that the average hungry human has never heard of before.

Capellini is a very thin variety of spaghetti, with a diameter that is often well below one millimeter (0.033 to 0.036 inches). Given its thinness, it is among the fastest-cooking pasta varieties – some recipes call for it to be cooked for two minutes at most, others, for simply scalding them with boiling water and letting them sit and soak for a short while before eating.

Capelli D’Angelo, the Italian pasta with perhaps the most alluring name, is even thinner, and it’s often sold in a nest-like shape. It goes well with soups, seafood, perhaps with light sauces.

Fiori (it translates as “flowers”, which is a very descriptive name, given its shape) is a short-cut pasta variety that resembles a flower. It is a decorative variety, often in different colors that goes great in salads.

Paccheri is not your usual pasta – in its case, the sauce and the other ingredients don’t go on the outside but on the inside. It is basically a large tube, either ribbed (paccheri millerighe or paccheri rigati) or not. They can be eaten as a usual pasta variety (although it collapses under its own weight, so don’t expect it to look especially gorgeous when served with ragú) or it can be stuffed with various ingredients.

For those who find paccheri a bit too large, there is a shorter variant called “mezzi paccheri”.

Invented between the First and Second World War, radiatori is a pasta variety that has earned its name – it really looks like a radiator. While this shape may come off as a joke (it is said to have been created by an industrial designer) the design is actually pretty clever: it maximizes the surface area, improving heat exchange (like a true radiator) and it traps more flavor than the other variants.

Finally, one of the most basic pasta varieties that is versatile and widespread: acini di pepe (seeds of pepper). Similar to couscous, acini di pepe is used mostly in cold salads and soups – it is often used in the traditional Italian wedding soup (minestra maritata).