The Ultimate Sacrifice: The Story of St. Valentine 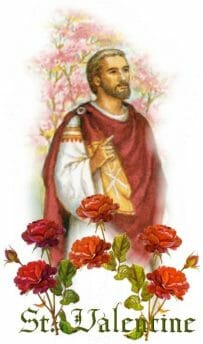 We give our loved ones cards and chocolates each year to mark the international day of Romance, St Valentine’s Day, February 14th. But who is Saint Valentine and what did he do?

There is much conjecture about whether there are two or three Saint Valentine’s or whether they are in the fact the same person.

‘THE” Saint Valentine however is known to be a Roman Priest who existed under the reign of Emperor Claudius II in the 3rd Century AD and day was declared as St. Valentine’s Day by Pope Gelasius I in the 5th Century AD.

Rome was amidst heavy engagement in all directions. The Romans were waging civil war in Milan and several threats existed from the Goths while attacks were being waged in the west against the Gallic Empire.

Having sustained heavy losses in terms of strategy and casualties, Claudius II continued to aggressively pursue Rome’s influences throughout the old world. To sustain these unrelenting attacks the Emperor made the decision to ban young people from marriage in the belief that they would make better soldiers. An ancient version of “women will make you weak at the knees, Rock”, if you will, from Rocky’s more modern gladiatorial depiction on the silver screen.

At a time of polygamy and Roman Bath’s it was no wonder that the marriage ban would prove unpopular throughout the empire.  In the Roman Catholic Church, marriage is a sacrament and a Priest which we now know to be Saint Valentine would perform marriage ceremonies in secret to continue the traditions of the Church and culture which we still honor today.

When these secret ceremonies were discovered, Emperor Claudius II ordered the capture and death of Valentine who was indeed captured and brought before the Prefect of Rome. He was ordered to be clubbed and beheaded and thus became a martyr who was later canonized by the Catholic Church. Prior to his beheading, Valentine was said to have passed a note to the daughter of one of the soldiers that he signed “From your Valentine”.

If other Valentine’s did indeed exist they too were believed to have been brought to their deaths also and in true Italian fashion, sacrificing their very lives for love.

2 thoughts on “The Ultimate Sacrifice: The Story of St. Valentine”