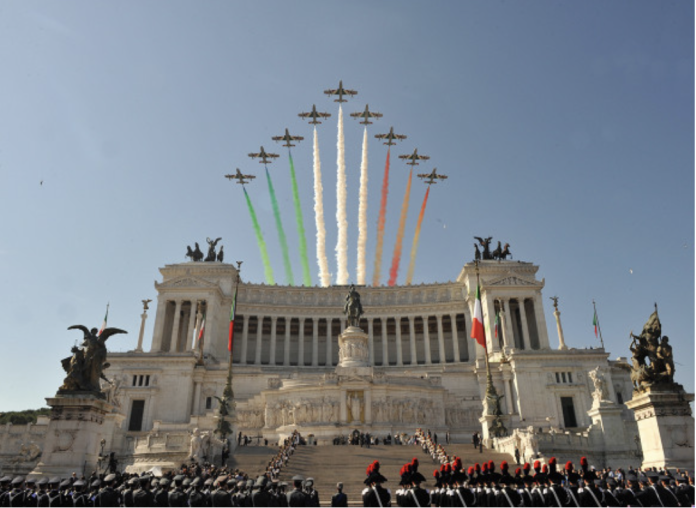 Although Italy has over 3,000 years of continuous history stemming back to before 700 B.C where it was believed to have already been inhabited, few people outside of the Italian community recognise that the modern Italia that we know and love was unified most recently in 1861. The Italian community, however, celebrate a more recent event, that being the creation of the Italian Republic in 1946.

On June 2nd every year there are a number of observations followed by a huge array of pageantry in ‘The Eternal City’. A flag-raising and wreath laying ceremony is observed at the Altare della Patria in Rome followed by a parade featuring an array of armed forces and paramilitary personnel.The parade features a number of military and paramilitary divisions including the Corazzieri, Carabinieri, Bersaglieri, army and polizia.

The celebration marks the end of Facism and the end of monarchistic rule, and the beginning of the ‘free state’. In a tumultuous history, Italians, who have always been suspicious of all leadership models, had an undulating respect for the monarchy in a way that can be witnessed in the modern day United Kingdom or other countries. Similarly Fascist rule was popular with the Italian monarchy who supported the new style of government that was installed by the will of the people. Italy had quickly gained strength and spread its spheres of influence into  Northern Africa. After making unlikely bedfellows with rivals Germany in the lead up to World War II, Hitler went to war, against the will of the Italian leaders. Italy, however, went in full support as per the pact that they had formed. When Italy’s war machine became compromised and Italy surrendered to the Allies, insurgents overthrew the fascist regime and many laid equal blame on the monarchy, eventually banishing both from the country and the constitution.

On June 2nd and June 3rd 1946, Italy was given a referendum as to whether they wanted a republic or monarchy.  The King of Italy, Umberto II of Savoy, left Italy to avoid the revolts which were bloodily contested throughout the major cities. The referendum resulted in a narrow victory to the republicans.

A new constitution was drawn up and from 1948 would be that of the Italian Republic. The document banned the male descendants of the House of Savoy (The unseated royal family) from entering the country, a rule that would remain until the next millennium. In June 1946 the first Public Holiday marking the new Republic took place.

Italians all over the world celebrate the Italian republic on and around June 2nd with fireworks, festivals, balls and dinners. Italian history has a long history of wars with external factions and a long history of civil war. June 2nd is a day for all Italians to unite and remember those who fought and fell for the tricolore.