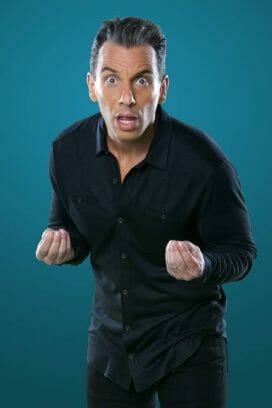 On Saturday, April 30th, the Carnegie of Homestead Music Hall in Munhall, PA, presents the hilarious Sebastian Maniscalco. Sebastian’s specialty is saying what we’re all thinking, but when he says it, it’s a whole lot funnier. Fans across North America show up in droves to see Sebastian’s dead-on social commentary on marriage, family and his Italian upbringing. From the moment Sebastian takes the stage, his hilarious facial expressions and animated delivery has his audience totally captivated, in the moment and hysterically laughing.

Maniscalco is now hard at work on his first memoir expected in 2016, titled “Where You Wanna Eat?” combining his two favorite things: comedy and food.  The memoir by Maniscalco and co-author Alan Eisenstock will explore Maniscalco’s dining experiences and dos and don’ts from a lifetime as a diner, waiter and keen observer of human nature through a series of his most memorable meals (Gallery Books, an imprint of Simon & Schuster).

The first glimpse at the table-side humor audiences can expect from Maniscalco in his memoir was seen when he joined Jerry Seinfeld for “Comedians In Cars Getting Coffee.” http://comediansincarsgettingcoffee.com/sebastian-maniscalco-i-dont-think-thats-bestiality

Sebastian recently landed a new pilot on NBC in which he is set to Executive Produce and star in. The new pilot is inspired by his life and comedy along with writer Austen Earl and Greg Garcia (Amigos De Garcia Productions). http://deadline.com/2016/02/comedy-pilot-star-comedian-vladimir-caamano-sebastian-maniscalco-game-show-hybrid-nbc-1201695153/

After nearly a dozen sold-out performances in New York City’s comedy circuit in the last year alone, the Chicago-born-and-bred turned Los Angeles native has tapped Manhattan as the backdrop for his newest comedy special, to be filmed in May of 2016 at the historic Beacon Theatre. This highly-anticipated new hour of skepticism follows up Sebastian’s 2015 Showtime standup special and DVD “Aren’t You Embarrassed?” in which millions tuned in to see his witheringly sarcastic and exasperated take on modern behavior and etiquette.

As the “Dallas Observer” noted, “Much of the material for his three comedy specials and tours comes from his astonishment with modern society’s unspoken rules and the juxtaposition of current culture against his upbringing in a hardworking, ‘half-Sicilian, half-Italian’ immigrant family.” Sebastian shares, “Those values … have been a catalyst for my comedy. I’m like, ‘Wow, I guess a lot of people didn’t have this type of upbringing’ … that old world technique of, you know, nothing’s given to you, you’ve gotta work for everything you’ve done.” 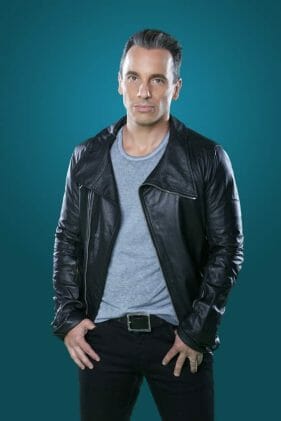 Since then, the 2014 American Comedy Award nominee for Best Club Comedian has established an avid fan following via national late night television appearances on “The Tonight Show Starring Jimmy Fallon,” “Late Night with Seth Meyers,” “Conan,” and more. Sebastian is also a popular guest on networks such as “Showtime” and “Comedy Central” and the ground-breaking podcast “WTF with Marc Maron” in addition to “The Joe Rogan Experience” podcast and starring in his own wildly popular “The Pete and Sebastian Show” podcast every Friday night.

Distinguished by “The New York Times” as a comic with his “own kind of panache,” Sebastian has taken on everything from selfies that he calls “lonelies” (“Do you know how alone you have to be to have 838 photos of yourself in your bathroom?”) to online restaurant reviews (“Who’s got the time to write an 18 page essay on asparagus?”) to airport check-ins (“I’m taking out a boot…a sock…a toothpaste…does anyone know what two pounds is?”).

Still sporting his Chicago accent despite leaving the Windy City in 1998 to follow his dream in Los Angeles, Sebastian began paying his comedy dues by night playing his brand of comedy in bars and bowling alleys while working as a waiter at the Four Seasons Hotel in Beverly Hills. He eventually broke into the national spotlight with a 20-city tour in support of his one-hour “Comedy Central” DVD Special. Yet, it wasn’t until Sebastian captured the attention of award-winning actor and entertainer Vince Vaughn who selected him to be one of four featured comedians in the critically acclaimed film “Vince Vaughn’s Wild West Comedy Show” that his comedy career began to explode.

He eventually broke into the national spotlight with a 20-city tour in support of his one-hour “Comedy Central” DVD Special. Yet, it wasn’t until Sebastian captured the attention of award-winning actor and entertainer Vince Vaughn who selected him to be one of four featured comedians in the critically acclaimed film “Vince Vaughn’s Wild West Comedy Show” that his comedy career began to explode.

The Truth about Hot Peppers