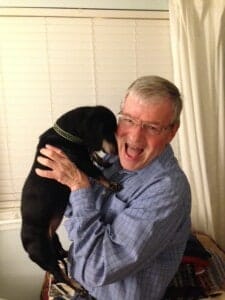 Ciao Pittsburgh is launching our new and improved Personality Profile series on current and former Pittsburghers and what being Italian means to them.

(as told to Ciao Pittsburgh by Robert Tick)

I was born on a cold winter day at West Penn Hospital on February of 1946.  My parents lived in Squirrel Hill in half of a double house with my father’s sister Aunt Bessie. Dad was a Russian Jew and Mom was a German Catholic.  My Dad told my Mom it was OK to raise the kids Catholic.  However to appease Aunt Bessie she was told the kids would be raised with no religion and choose what they wanted to be when they came of age.  One day my sister was in the back yard proudly wearing her First Holy Communion pin.  When my sister showed my Aunt the pin she immediately told my Dad he and his family had to move. I was 6 months old and don’t remember her or living in Squirrel Hill.

My Dad bought a house on Bennett Street in Homewood and opened his 5 & Dime Dry Goods store in Brushton.  Homewood in those days was a wonderful neighborhood to live in.  Mother of Good Counsel church was a block away and the neighborhood was almost entirely made up of people from Naples Italy.  My Dad loved Italian food and Mom learned to cook it from all the wonderful women in the neighborhood.  I think I was the only one in school whose last name did not end in a vowel. I was probably 10 before I realized the not everyone was Italian and Catholic!

Both sets of my Grandparents died in Europe and I never met them.  But all my friends Grandmas were my Nonna and they loved me like their own.  They spoke to me in Italian and very young I mostly understood but unfortunately I’ve lost most of it now.  When my Mom helped my Dad in the store my sister and I would go next door to the Capuano’s on Christmas Eve and eat the Feast of the Seven Fishes.  Oh how I loved it.  Uncle Pete would take us to the living room where Mr. Quintaliani would play the mandolin!  We would go on picnics in the summer and Mom and Aunt Della would bring a feast not just hotdogs like the Americans did!

When my sister begged my Dad to let her go to Mother of Good Counsel school he gave in and this is where my journey with the Ferrari family began.  My sister became best friends with Angie Ferrari in third grade and they are best friends to this day. Dan and Theresa Ferrari had five kids of their own and Lucille was my age and we became great friends.  My Dad died two weeks before my Confirmation. Lucille and I were confirmed together and by this time they were Aunt Theresa and Uncle Dan and they had us to dinner on Confirmation day.  Also they would visit us after Sunday mass before visiting both sets of Grandparents.  When I would go over there to play I would pray Aunt Theresa would ask me to stay for dinner and she always did.  She made the best eggplant I have ever tasted and her Mom (Grandma Lamberti) made the best pizza in the world.

Jumping to High School my sister who is five years older than me got married and her husband was transferred to Chicago.  I was a sophomore at Central Catholic High School and I wanted to finish there.  I still think it’s the best High School in Pittsburgh. (My brother-in-law went to North Catholic and it was not always a happy football season in our house). Homewood became a neighborhood in quick decline and my brother-in-law told Mom she better sell while she could get some money out of the house.  Anyway Aunt Theresa and Uncle Dan who had five kids of their own offered to take me in and Mom agreed.  Mom moved to Chicago and the next two and a half years were the best years of my life.

Aunt Theresa and Uncle Dan treated me the same as their kids. Finally I really had a loving family with Grandparents to boot!  Their five kids treated me the same as if I were really their brother.  There was love and laughter, great food and Aunts and Uncles and I had to pinch myself every day for my good fortune.  I used to pretend to do homework at the kitchen table just to watch Aunt Theresa cook…and cook she did. Both Uncle Dan and Aunt Theresa died, he first in 1995 and she two years ago.  I was able to tell her what she meant to me and how much I loved her many times before her death.  We talked food, her cooking especially, at least a couple of times a week.

I am delighted to be in touch with my “adopted” sisters and we had our first reunion last September.  It was like we never skipped a beat and they took Ed into their homes like he was one of them.  I love them even more for that.

I attend an Episcopal Church now because they accept gay relationships and Ed and I have been together for 27 years…24 committed and 3 years married.  My life is as beautiful and moral as any of our straight friends and family members…not without some challenges like every relationship!  I did not convert and I will go to my grave as a Roman Catholic.  However until Rome ordains women priests, accepts married priests and gay men and women.  I will go where I am accepted as an equal member at the table of Christ. I loved visiting St Maria Goretti church in Bloomfield.

So you can see that although my bloodline is anything but Italian…my culture is Italian.  Ed always tells me that I am not Italian…I just think I am.  I always tell him I know that but my Italian childhood and culture makes me Italian and right or wrong I claim it!!