Tourists, the world over, often visit the Vatican City in Rome to see the Pope, St Peter’s Basilica and the the highly recognisable spear wielding court jesters that guard the sacred city. Unbeknownst to many, these elaborately adorned security detail are a very serious battalion known as the ‘Pontifical Swiss Guard’.

Unlike the equally iconic Queen’s Royal Guard in the United Kingdom who are instructed to ‘stamp their foot and request that any nuisance step away’ the Swiss Guard are a highly skilled elite fighting force who are not only highly adept with hand weapons  but also possess one of the most impressive munition stocks of army piercing weaponry on the planet.

In the 15th Century, Switzerland’s small army had a reputation of overcoming much larger rivals. As Switzerland  was an impoverished country with few prospects for many, individual soldiers and small groups of mercenaries often loaned themselves out to other armies or leaders. The relationship with Rome began with Pope Sixtus IV who had a strategic relationship with Swiss rulers. The Pontifical Guard were officially appointed on January 22nd 1506 by Pope Julius II. This makes the Swiss Guard one of the oldest standing military units in the world. 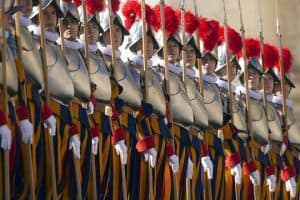 Although the Swiss Guard are the world’s smallest army, its history is significant within the Italian context. From the birth of Catholicism to the Italian risorgimento, the Papacy was often implicated as a player in the struggle for what is now the Italian Republic. The Vatican eventually employed its own army to fight, as an ally, assist other battalions, defend its states, or fight on its own in an attempt to usurp Italian rule.

Even today, new recruits to the Swiss Guard are inducted on the 6th May each year, the significance of which, harks back to the same day in 1527 when King Charles launched an assault on the Vatican. In this historical exchange, the Swiss Guard were able to defend the fleeing Pope despite losing 150 lives of the 189 Guards that defended him. It was with this unwavering loyalty that the guard remained under the Papal employ and that dictates the ethos of the guards today.

So if you are ever going to visit Italy to marvel at the historical significance of the ceiling of the Sistene chapel and the hand of God, perhaps you should take a moment to recognise the hands that have protected the Holy City and the 51 Popes that have have been it, the Pontifical Guard.