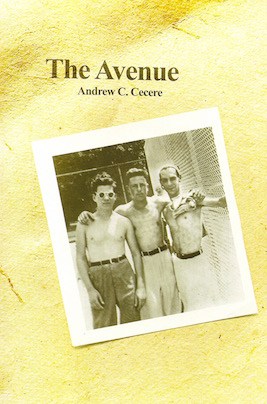 Andrew Cecere grew up in the Pittsburgh of the 1930s, back when the idea that ancestry is destiny permeated American thought. In cities, it was the age of racial and ethnic neighborhoods. The Italians here, the Irish over there, beyond them the Poles, the blacks, and so forth. In the urban mosaic, you knew your place, and were expected to make the best of it.

Such is the prevailing mood in the Italian-American neighborhood of East Liberty that is the setting for Cecere’s novel, The Avenue, published last December by Rosedog Books. Here, two friends, both offspring of immigrants, grow up during the waning years of the Depression and choose very different paths in an America riddled with prejudice.

Pre-war Pittsburgh and the Italian community of East Liberty loom large in the novel. “The book’s setting more or less describes Larimer Avenue, a real street and neighborhood where I grew up, but the characters and story are fictional, drawn entirely from my imagination,” says Cecere, a retired attorney who lives in Richmond, Indiana.

Cecere, who recently turned 94, wrote the book on legal pads more than twenty-five years ago. “It started entirely as an exercise in personal pleasure since I’ve always enjoyed writing and telling stories,” he explains. “When I finished I had the handwritten pages typed up and pretty much forgot about it. Eventually I passed the manuscript to some friends to read. They told me how much they liked the story and started nagging me to get it published. So here we are.”

Since it appeared last December, the book has enjoyed lively sales through the publisher and on Amazon.com. Around Richmond, and in the South Florida community where he spent the winter months, Cecere found himself something of a celebrity, a surprise status for someone his age. “Oh, yes,” he grins self-consciously. “Lots of people ask me to sign copies, or come and talk to their groups, or to join them for dinner. That part’s pretty enjoyable.”

The book has garnered some national critical attention, too. “Debut author Cecere makes an impressive entrance with this poignant, character-driven novel,” says Kirkus Reviews, which culled The Avenue for special recognition among independently published books in the May issue of its magazine.

The review cites particularly Cecere’s powerful passages describing combat on the Italian front during World War II.  Cecere himself served in the latter months of that war as a Marine infantry officer, although in the Central Pacific and North China.

The Avenue has also earned something of a celebrity endorsement, that from friend and former NBA coach Del Harris, who writes on the novel’s Amazon.com site, “The book comes alive with a compelling story and vivid characters . . .  and the competition between evil selfishness and loving relationships.”

After his wartime service, Cecere earned his doctor of jurisprudence degree from the University of Michigan Law School and then settled in Richmond where he had earlier attended Earlham College. Cecere was recalled to active duty for eighteen months during the Korean conflict, serving most of that time with the Office of the Judge Advocate General of the Navy located in the Pentagon.

Back in Richmond, Cecere enjoyed a long and successful law practice and became a leading figure in many community betterment efforts. For several years he served as city attorney.

He and his late wife, Betty, raised three daughters, two of whom are successful business leaders, the third a public artist. All live on the East Coast. Hardly a one-book wonder, Cecere is soon to publish a second volume, this one a sampling of short fiction stories and essays, titled A Habit for Words, Collected Writings: People, Places, Perspectives.  The book will soon be available at Amazon.com.

You can purchase The Avenue on Amazon.com and through RoseDog Books, Pittsburgh, 800-788-7654.