From his humble beginnings as an Italian-born American who devoted his time to becoming a weightlifter to ultimately headlining Madison Square Garden as a professional wrestler, Bruno Sammartino’s penchant for being one of the most popular Italian-Americans in the Pittsburgh region sparked a long-lasting and rewarding career. Pittsburgh has been home to many great athletes—but none loom larger than Sammartino himself.

Born October 6, 1935, Sammartino is best known for being the longest-running champion of the World Wide Wrestling Federation (WWWF), holding the title across two reigns for over 11 years—longest in the history of professional wrestling history. Throughout the 1960s and 1970s, he was one of the most popular American wrestlers of all time. Fans not only adored his mat skills, but his personal charisma and charm as well. 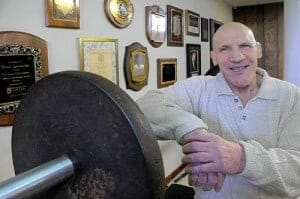 Born in Pizzoferrato in the Abruzzi region of Italy, he was the youngest of seven brothers and sisters. In 1950, his family moved to Pittsburgh where his father had already lived for several years and worked in the coal mines and steel mills. Due to his gangly appearance from catching rheumatic fever and hiding to escape Nazi soldiers in World War II, Sammartino wanted to build himself up physically and spent many days and weeks working out by lifting weights. His devotion to becoming a weightlifter led to him setting a world record in the bench press with a lift of 565 pounds in 1959. He also competed in bodybuilding competition and won the title of “Mr. Allegheny” around the same timeframe.

After a local wrestling promoter Rudy Miller saw Sammartino in action, he recruited him to become a professional wrestler. He made his professional debut in Pittsburgh on December 17, 1959, pinning Dmitri Grabowski in 19 seconds. Later that same year, on December 23, he pinned Miguel Torres, on Pittsburgh’s local TV wrestling program, Studio Wrestling. Studio Wrestling, which Sammartino later purchased, was canceled in 1974. But the WWWF took notice of Sammartino’s popularity in the region and asked Sammartino to join the promotion.

Sammartino’s first match in Madison Square Garden was on January 2, 1960 against Bull Curry. Within six months of his debut in wrestling, Sammartino was headlining other matches at Madison Square Garden. He won the WWWF World Championship title on May 17, 1963, by defeating the “Nature Boy” Buddy Rogers in a mere 48 seconds. He kept the title for seven years, eight months, and one day—the longest reign ever in the history of professional wrestling.

On March 25, 2010, Sammartino was honored at the 74th annual Dapper Dan Dinner in Pittsburgh, with a lifetime achievement award.

Although Sammartino remains a private person these days, he was still gracious enough to respond to a few Q/A that Ciao Pittsburgh had for him.

CP: Which city in Italy is your most memorable?
Bruno: Rome, for its rich history.

CP: When you hear the words, Italy or Italian, what is the first thing that comes to mind?
Bruno: The best food in the world!

CP: So what is your favorite food?
Bruno: I enjoy eating pasta, lamb, and type of fish.

CP: Any particular place in Pittsburgh that you like to eat?
Bruno: Rico’s.

CP: What does being Italian mean to you?
Bruno: I’m just very proud of my heritage and to be an Italian.

CP: What do you love most about the city of Pittsburgh?
Bruno: Definitely the people.

CP: Tell us how or what made you choose wrestling as a career?
Bruno:  I actually started to wrestle in high school (at Schenley High School) and loved it. Because of that I wanted to make it my career.

CP: What did you love most about being a professional wrestler?
Bruno: Without a doubt, traveling and seeing the world, as well as hearing the roar of the crowds in the different arenas I wrestled in around the world.

CP: Finally, Bruno, tell our readers what do you like to do in your spare time?
Bruno: I love to be with and spending time with my family, working out, listening to opera, and visiting with my friends.