As a child I remember my great grandfather playing Italian Opera music in his house. He was very proud of his Italian heritage, as well as the music and arts that came from his birth land. He knew about these operas and took great pride in knowing that these magnificent works originated from the same country he was from.

Perhaps this is the reason I am so fond of operas and opera music.

I love going to the opera; the sights and the sounds are just surreal. The stories are rich, and the plots are engaging.

To say that I am an opera aficionado—well, that would be a stretch. I am more of an opera enthusiast; I appreciate it as an art form.

So when the opportunity arose to interview the leads for the Pittsburgh Opera’s upcoming production La Cenerentola (Cinderella) (coming April 27th – May 5th), I was ecstatic.

I headed to meet the singers before a rehearsal for the show. I had done my homework and knew a bit about them, but I honestly did not know what to expect.

I was greeted at the door and then immediately introduced to Paolo and Vivica who were both warm and engaging. Vivica is a stunning woman with long raven black hair who has an angelic voice. Paolo has a deep booming, handsome voice that matches his exterior.

Vivica and Paolo were genuinely happy to meet with me and talk about a completely different aspect of their life—food!

As I began the interview, Vivica charmingly kicked off her pumps and curled her legs under her. She has such an unpretentious air about her. Paulo sat back and stretched out and began to get comfortable. He has a warm and infectious smile with an inviting personality.

What struck me throughout this entire interview was the dynamics and the chemistry between these two mega stars. At times it was like watching old friends catching up; they sat together, talked and even asked each other questions. 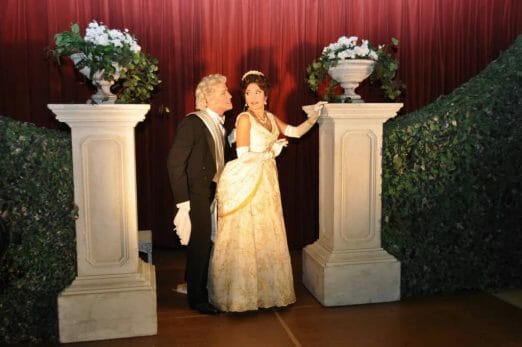 Paolo, who is from Florence Italy, is an Italian Bass opera singer who specializes in the bel canto repertoire. Before becoming a famous opera singer, he was a chef in Tuscany.

Vivica chimes in, “Yes, how did you become a chef?”

Paolo began to tell us his story. He describes himself as an “intellectual child” growing up who wanted to sing.

“In Italy, there is a saying that ‘I am harder than a stone’ and that describes me accurately,” he says. “I was determined at a young age to become an opera singer; becoming a chef allowed me to fulfill my dream.”

Paolo enrolled in the local culinary arts school at the age of 14. He excelled and soon began teaching cooking classes; he was only 16 at the time. He traveled around with his professors and soon began making his life as a chef.

“As a chef, I was paid well and this allowed me to pay for my operatic studies,” he says.

Paolo says his favorite dish growing up was a dessert that his grandmother made, and his mother still makes for him, called Castagnaccio (chestnut flour cake).

Vivica lights up and says, “That is my husband’s favorite thing…do you have a recipe?”

Paolo describes how he and his family make it and then tells Vivica that he will email her his recipe. I just chuckle at this exchange because it is so earnest; opera stars exchanging recipes.

Vivica is an Alaskan born mezzo-soprano who is famously known for her trouser roles—roles which a woman plays the role of a man while wearing male attire.

She learned to cook later on in life.

“Growing up all I knew how to do was boil water and microwave things,” she says.

Raised in Alaska, she says she had a different food experience. “My mom made an oven (roasted) chicken on Sunday for dinner but we only drank powered milk because that was all that was available. Everything had to be imported so this is why we drank only this kind of milk.”

Vivica grew up eating “fondues…. stew type dishes like Corned Beef and Cabbage.” Some of her favorite foods to eat were Kidneys (Rognon), and Liver with Onions. She told us that as a young child she spent a year living in Brussels and Kidneys (Rognon) were her “favorite” dish to eat while there. Her dad would bake “frozen bread once a week…but it just wasn’t the same as bakery bread.”

She has developed a fondness for specialty breads and occasionally will eat them, “especially the European Bakery breads.” Vivica confessed that she is not a big sandwich person, despite her affinity for these types of breads.

Since Paolo and Vivica have a hectic travel and work schedule, I was curious how they maintained a healthy lifestyle despite the chaos of their schedules.

Paolo says he needs to always have two things with him. “I need to have my olive oil and my coffee (coffee machine).”

Vivica laughs because when she travels with her husband, Massimo, who is from Italy, she has to make sure that he has the right type of coffee “because the Italians with their coffee.” Paolo laughs in acknowledgement.

Paolo incorporates lots of fresh fruits and vegetables into his diet. His favorite fruit is pears. He eats salads with a simple dressing; good olive oil, red wine vinegar and salt. His secret for his famous salad dressing is Lucini Olive Oil.

Vivica says all of her exercise comes from running in airports to catch all of her planes. She will pack raw veggies for rehearsals. “I love raw broccoli or raw salad.”

Vivica says that she is not as big a fruit fan as Paolo, because she gets disappointed when the fruit does not taste as good as it looks. She admits she had picked up some wonderful mangos from the market the other day and that she was pretty happy about that. 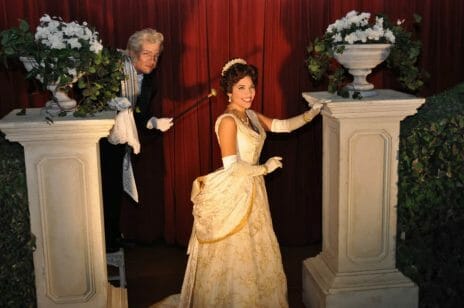 They will both indulge in piece of chocolate every so often. Vivica admits she had just eaten a chocolate turtle the other day because someone had brought them in. Paulo likes to eat his favorite Italian chocolate bar, Novi.

While they are traveling they will enjoy the local cuisines, however they do enjoy some down time when they are home.

Paolo enjoys cooking when he is home. He created one of his favorite dishes a Lasagne con Ragu with fish. It is a dish with specialty noodles that accommodate his gluten allergy.

“That is a dish made without cheese, made with a béchamel sauce made with stock not milk,” he says.

When Vivica returns home, her husband does most of the cooking. She and her husband Massimo live outside of Venice. She describes herself as a “great sous chef.”

Vivica eyes light up as she describes all the wonderful food and dishes that Massimo cooks for her. She describes several dishes which include some of her favorites; the wood grilled marinated chicken in garlic and hot pepper, the skillet potatoes in broth and butter and Bistecca alla Massimo (flank steak).

Paolo and I sat and listened. Vivica told us about more Massimo’s cooking, the food sounded absolutely incredible. I asked Vivica if her husband cooks with passion, and she laughed and smiled as did Paolo. I soon realized that he was like all Italian men who I know that cook—they cook with their hearts and souls.

The interview was coming to a close, and it seemed as though the time had just flown by. That is what happens when gastronomes are together talking about their favorite subject, food.

We said our goodbyes and then Paolo and Vivica went to rehearsal. I heard them singing as I left the building. I wondered how they could sing after the foodie conversation that we had just had. My mind was only thinking about food that we had just been talking about.

I guess that is why they are the stars of the show.

For more information about Paolo Pecchioli, check out his web site.

Vivica was kind enough to share her and Massimo’s recipe for Bistecca alla Vivica for this blog post (see below). This is one of her favorite dishes. Grazie Vivica and Massimo!

Please check out more of her recipes and to find more information about Vivica Genaux on her web site.

The Pittsburgh Opera has graciously offered Ciao Pittsburgh readers discounted tickets to the upcoming performance of La cenerentola (Cinderella) by Rossini. Purchase a ticket for $50 (value up to $155.75) and you will be seated on the day of the show in the best available seating.

The show’s times and dates are:

Flank steak is *totally* easy- I’d eat it every day, but I use lots of garlic and it’s kind of mean if you eat it before running off to rehearsal…

The trick is, you make parallel slices about 1/4 to 1/2 way through the meat, going *across* the grain of the meat. You can cook it like that, but I usually slice again perpendicularly to the first slices, making “X” shaped slices all along the piece of meat. The flank steak can be kind of tough because of the grain of the meat, but making the slices before you cook it make it easier to eat later.

Then you put as much garlic as you want in the slice-marks (I usually just bash two cloves of garlic and then break them up into little chunks that fit into the slice-marks) If the garlic is nice and deep into the slices then it won’t burn, if it’s just on top of the meat it gets all charred.

Finally, you put the steak into the broiler, and depending on how cooked you want it, in about 7-10 minutes it’s done. I add salt or herbs afterwards. 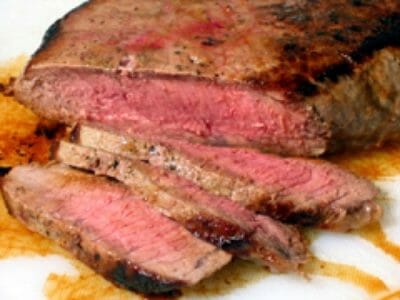 Learn How to Make One of Giacomo’s Favorite Sandwiches