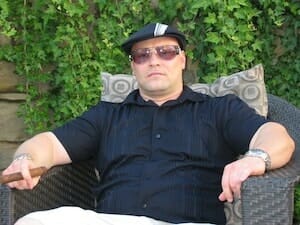 I wanted to talk a little about bocce. Our bocce summer league in Bloomfield ended a few weekends ago during the Little Italy Days tournament.  There was a large turnout—thanks to all of you who came out! In fact, I spoke with some people afterwards who said they wanted to say hello earlier but just couldn’t get near the court.

Just a brief recap of our season—we did some maintenance to the courts earlier in the year. We painted new foul lines, groomed the courts to remove unwanted weeds and divots, as well as trimmed back one of the trees that was blocking the light.

Here are a few things I will miss about our league until next summer:

But these memories will give me something to look forward to next summer! If the weather is good, we’ll start playing again in May and end the season a few days before The Little Italy Day’s tournament.

I do like the fact that in the winter months we have a few bocce dinners during which we raffle off items that our three great sponsors donate to our Bocce Mafia club: Birra Moretti, our Gold Level tournament sponsor, Allegheny Smoke Works, our Red Level Sponsor, and The Leaf and Bean—McMurray location, our Green Level Sponsor.  We can’t thank them enough.

If you haven’t played bocce, I highly encourage you to try it. It’s a lot of fun and your whole family can enjoy it. If anyone wants to share pictures of their own tournament or just playing around in your yard or on the beach, email them to me at jack@ciaopittsburgh.com, and we’ll share them with our readers and on our Facebook page.

Finally, keep an eye on this site. We post a new article at least once a week, along with some great videos and other content we’ll come across. We try to mix it up a bit to keep you interested and engaged. If all goes well, in a few weeks we will have a video from the Little Italy Days in Bloomfield.  We have two videos from last summer if you would like to see them.

Thanks for taking the time to read this month’s Publisher’s Note. Until next time!