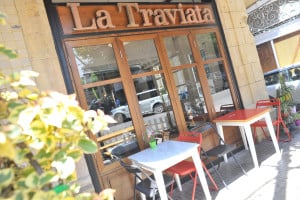 “I want people to walk through that door and feel they are in Italy,” says Christian Bou Chaaya, the owner of the Lebanese branch of La Traviata, a cozy 25-year-old family-run restaurant in Bologna, the culinary capital of Italy. He is proud to have brought the little Italian restaurant across the Mediterranean to Beirut.

Bou Chaaya, who has a background in hospitality and event planning in Qatar, had always planned to open his own venue in his home city, Beirut. On a business trip to Italy, he visited La Traviata by chance and fell in love with its authenticity, immediately deciding that it should be the restaurant through which he realizes his plan.

After some initial research revealed that La Traviata was ranked number one among Bologna’s 360 restaurants on the travel website Trip Advisor, Bou Chaaya was even more convinced of his choice, and he decided to approach the family with the idea of franchising a branch in Lebanon. The matron, Manuela Sabbatino, was easily swayed.“They were happy that someone was interested in expanding their business [even] before knowing my background and what I could provide them with,” he says.