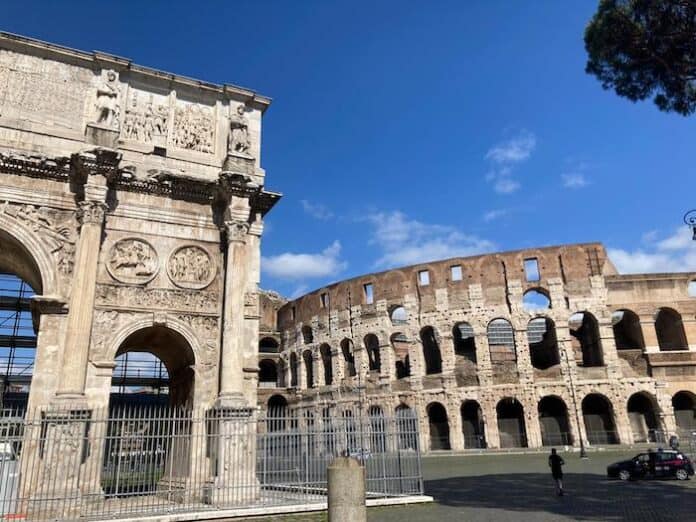 Most Italian American families, like mine, arrived in L’America between 1880 and 1924. Our ancestors were fleeing the rural poverty of Southern Italy and Sicily for a booming economy that helped those who eventually returned to Italy do so with their pockets filled. Those who remained were drawn to skyscrapers, democracy, crooners, and bold enterprises. They were anxious to assimilate, refusing to teach their children (including my siblings and me) the Italian language and pushing us to become part of the Establishment, above the derision of “guineas” or “wops.” In our kitchens and our backyards, however, we kept our Italian traditions, inventing new ones that ultimately became those of the Italian-American community.

These forces are reflected in the fictitious Italian-American family I depict in Iron Butterfly, the recently released Book One of my Mezzogiorno Trilogy.   Through their relationships, hopes, and aspirations the Bennetts show us the uniqueness of the American dream in the late twentieth century. Although patriotically American, the Bennetts are also proudly Italian—as were countless other Italian-Americans in those times.

But with the new millennium came change. Time had passed and our newness had dissipated; political scandals, social media, and 24-hour news made self-vindication the norm. We’re now in the throes of what Pope Francis describes as the era of radical individualism.  Against this backdrop, here’s how I feel the Italian-American experience has changed over the past forty years.

Growing up, many of us had relatives from the Old Country living near us. I had my grandparents—Tony, Carmela, and Dominic— and my great uncle and aunt, Zi’ Tomas and Zi’ Marietta.  The wall of my grandmother’s kitchen was adorned with the decals of the schools her children and grandchildren had attended.  On weekends, we would sit around her table with Zio and Zia to play the Italian card game of Briscola (“breeshk”) and listen to their stories.

There was virtue in the traditions, patience, and wisdom that we gained through those long afternoons.  Although my first-generation mother remains available to impart her ways, her grandchildren have had less opportunity to tap this precious resource.

My son the doctor, my daughter the lawyer

Many first generation Italian-Americans aspired to have their children become part of what they perceived as the elite of the new country. As they labored to build their fortunes, our parents relished the prospect of telling others about “my son the doctor” or “my daughter the lawyer.”

I am an attorney and novelist who loves his work, grateful for my parents’ vision and the encouragement that led me to practice law. It seems that our children and their friends, however, gravitate toward their own choices.  Few of their paths are part of an inter-generational master plan.

What happened to Sundays?

Sundays had a certain recipe, never written: wake to the sound of meatballs hissing in oil, go to mass, and return home for a high meal.  A seven day schedule for our kids’ education and recreational pursuits—lest they fall behind their peers—has taken a wrecking ball to this sacred time. Our children are also fond of saying that their relationship with God is a personal one, and that they have little need for a church plagued by scandals.

From pasta e fagioli to eating out

There is confusion as to what is Italian versus Italian-American food.   Dishes like pasta e fagioli (“pasta fazool”),  parmigiana di melanzane (“eggplant parm”), and lasagne (“lasagna”) are native Italian, borne from necessity and inexpensive local ingredients.  The flavor bombs that we love—garlic bread, spaghetti and meatballs, chicken parm, sausage and peppers, lobster fra diavolo and cheesecake to name a few—were Americanized to satisfy our growing appetites.

Fast paced and health conscious, we now enjoy Italian-American fare less at home and more at Italian restaurants—owned by New Americans who are not Italian.

I loathe the negative stereotypes propagated by The Godfather, especially the notion that if you were a successful Italian-American in the twentieth century you were somehow “connected” or “mobbed up.”  This gave rise to preconceptions that obscured the hard work, creativity, and entrepreneurial spirit of our parents and grandparents.

The movie’s myths have endured because many Italian-Americans, including myself, are drawn to their characters’ charisma, power, fealty, and sense of “the family,” as twisted as it became.  Tony Soprano was more brutish than Vito Corleone and did not have lofty ambitions, but in the last episode, like Vito, was surrounded by a family that loved him.

Despite the tragedy that the pandemic has wrought, it has given us time to reconnect, particularly with those who remain from the Old World. During these waning days of our assimilation experience, our children are developing a curiosity not only for the beginning of our Italian-American journey, but also for the history, art, and literature of Italy. They want to make mozzarella or wine, learn the Italian language, partake in the Feast of the Seven Fishes on Christmas Eve, and sing Nessun Dorma as an encore to My Way.  Like many pursuits of the Millennials and Generation Z, perhaps their more plodding ethos will forge a richer and more lasting identity for us—as Americans of Italian ancestry.

Andrew Eustace Anselmi is a trial attorney and novelist. He and his wife Sole have raised their three children in Chester, New Jersey.  In 2017, Pope Francis bestowed upon him the title of Knight of the Pontifical Equestrian Order of St. Gregory the Great.  He is an avid Pittsburgh Steelers fan, who considers Franco Harris alongside Joe DiMaggio and Joe Montana as the greatest Italian-American athletes of all time.

Iron Butterfly is available for purchase via Amazon.