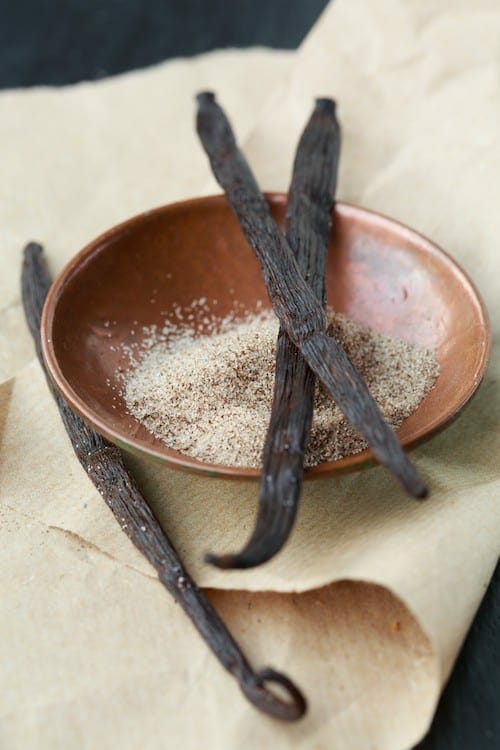 Vanilla extract is an essential ingredient in all professional and home bakers’ kitchens. It’s the ingredient that always adds a little extra flavor to your cakes, cookies, and even pancakes.

The best part is that it’s not a complicated recipe. Bakers of all skill levels can make this in their homes right now. But be careful; once you make vanilla extract, it might be the only vanilla flavor you love.

Where Does Vanilla Traditionally Come From

Vanilla planifolia is the only orchid of the species that is used for food production. Vanilla pods—commonly referred to as vanilla beans—create the vanilla we enjoy in our foods.

Pods are picked before they’re ripe, placed in hot water, then laid out to dry for about two to six months. These pods contain thousands of tiny seeds that hold the vanilla flavor.

If you’ve bought vanilla beans, you’ve probably noticed the high price point. That’s because vanilla orchids are picky and only grow within 10 to 20 degrees of the equator.

It’s also expensive because of the labor-intensive process to produce a bean. Native bees and hummingbirds pollinate the plants only for the flowers to bloom for a short time.

To meet demand, commercial vanilla is hand-pollinated. Vanilla is the second most expensive spice after saffron. Despite the high price, vanilla is still a much-loved ingredient for professionals and amateurs.

Outside of Madagascar, Tahiti and Mexico are the most common places where vanilla grows. Madagascar vanilla is the classic, rich flavor that most people are familiar with.

Tahitian vanilla has a sweet and floral flavor with underlying notes of cherry and anise. Mexican vanilla is a mix of sweet and woody flavors with an underlying flavor of spice similar to clove and nutmeg.

There are also different grades of vanilla. Beans rated as Grade A are longer and moister. They’re often called gourmet vanilla beans and are visually more appealing.

Grade B is the less expensive variety and tends to be less aesthetically pleasing. While both will make great vanilla extract, many people choose Grade B for cost savings.

Despite how time-intensive it is to pollinate and harvest vanilla, creating homemade vanilla extract is a relatively easy process. In fact, you’ll only need two ingredients and a few tools.

To make vanilla extract, you’ll need 18-20 vanilla beans. You can buy bulk vanilla beans online instead of the smaller packs that typically come in grocery stores. The second ingredient is 48 ounces of plain vodka, 80 proof preferred.

You’ll also need a cup with a lip to pour liquids or a small funnel. The containers you’ll need are 12 4ounce bottles with lids. The bottles should be clear so you can assess the color, and the lids should not be cork.

Lastly, you’ll need labels, a pair of kitchen scissors, or a sharp knife. Now that you’ve gathered your ingredients, here’s how to make DIY vanilla extract.

Start by washing and sanitizing the bottles and lids. You can use mild soapy water and rinse with boiling water.

Next, cut your fresh vanilla beans in half and slip them, so they open to reveal the tiny black beans. If your beans are too dry to split, you can instead cut them into one-inch pieces.

Next, place 1 and a half (3 split halves) beans into each jar. You can use the funnel or measuring cup to pour the vodka. Fill the jar to the top, then cover it tightly with a sealing lid.

Over the next two months, the vanilla and vodka will brew. Be sure to shake occasionally while they steep. You can use the labels to keep track of when you bottled the vanilla extract and when it’s ready.

After two months of brewing, you can use the homemade vanilla extract wherever you would use store-bought. Give the bottles a shake from time to time while it sits in your pantry.

Homemade vanilla extract makes great gifts for your friends and family. But what they’ll really love is tasting what you made with the fresh vanilla. Here are three delicious recipes you can try with your new homemade vanilla.

This is a great dessert for a summer afternoon. Topped with lemon buttercream flavored with your vanilla extract, this cake will easily become a fan favorite. Check out the recipe here.

Want to add a little spice to a Saturday night? Then you should try this cocktail that perfectly marries caramel, vanilla, and champagne. Give yourself a buzz from the fizz after you try this recipe.

If you’ve stopped buying store-bought vanilla extract, quit store-bought whipped cream as well. This topping is so easy to make and pairs deliciously with pies, cupcakes, and ice cream. Replace store-bought with this recipe.

If you’re a baker, then you probably rank vanilla extract among the highest used and most delicious ingredients in your pantry. It adds a hint of the classic sweetness that everyone loves in their cookies, cakes, and pies.

But if you want your recipes to taste better, then you should consider making homemade vanilla extract. This easy, two-ingredient recipe will become a new favorite for the elite flavor profile it offers.

If you could transform your baked goods, cocktails, and toppings with only two ingredients, why wouldn’t you?

Ready to take your kitchen to the next level? Share this with a baking friend and check out more recipe and lifestyle articles on our blog.